This is Scott's story of how he was diagnosed with Transverse Myelitis and then MOG Antibody Disease, which starts in March 2020. Scott created MyMyelitis to help other diagnosed with rare neurological conditions.

On Wednesday the numb feeling had started to become stronger, spreading across my chest and it had started to affect my breathing. I had to take painkillers to relieve it and to get through the day. Later that night, I found myself struggling to urinate.
I woke on Thursday morning with pins and needles in both of my legs and was completely unable to urinate. After sitting my exam that morning, I decided to ring the doctor.

The doctor wanted to see me as soon as possible, so I began walking to get a bus to the clinic. Whilst walking, my left leg was starting to weaken, causing me to be off balance and limp.

Once I reached the clinic, I told the GP the symptoms I had been experiencing through the week. He was unsure of what could be causing it but was very concerned about my inability to urinate. A bladder scan confirmed my bladder was holding at least 1 litre of urine. I needed to go to the Surgical Assessment Unit at the local hospital for treatment.

I arrived at the SAU and and had some of my blood taken as well as a indwelling catheter inserted to release the urine. The on-duty consultant then came and performed a neurological examination whilst asking questions about my symptoms and how they appeared. 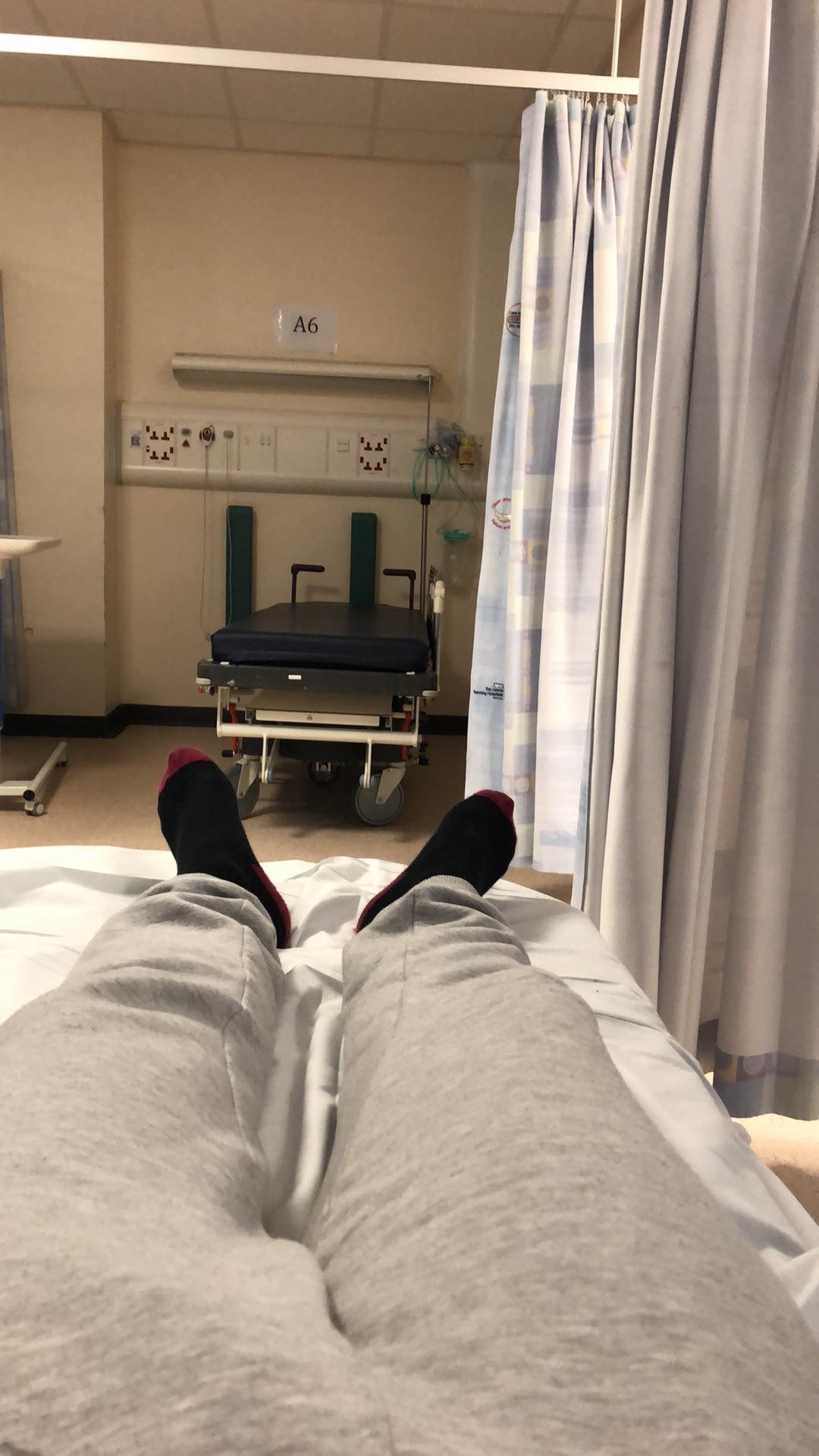 I was given a bed within the SAU overnight after having an MRI scan of my spine later that night. Whilst walking into the bed bay area I discovered I had lost most of the sensation and strength in my legs. I had to use the wall as support and guide my feet visually to avoid falling over.

The next day I had another MRI scan, but this time my including my brain and full spine. Neurological tests were done throughout the day as the strength and sensation in my body became worse. Eventually I received a call from a neurologist who had reviewed the MRI scans and had a diagnosis.

I was admitted into a neurology ward and treated with IV steroids for five days. The steroids also reduce the inflammation in the cord which was causing the aches, pains, and other symptoms.

The IV treatment began to regain my energy and feeling, and my strength began returning to my legs. I was now able to transfer myself from the hospital bed into the chair beside it, walk short distances with aid (e.g. to the toilet and shower), and stand independently.

The next phase of recovery involved my taking oral steroids (Prednisolone) starting at 50mg. Whilst on the neurology ward they checked my heart rate, blood pressure and temperature daily, and they performed blood tests every other day.

I also had a lumbar puncture/spinal tap to get a sample of spinal fluid. This was to try find a cause for the Transverse Myelitis in the spinal fluid.

I was able to keep my balance both with my eyes closed and eyes open. This progressed to finally being able to walk short distances and being able to use stairs. 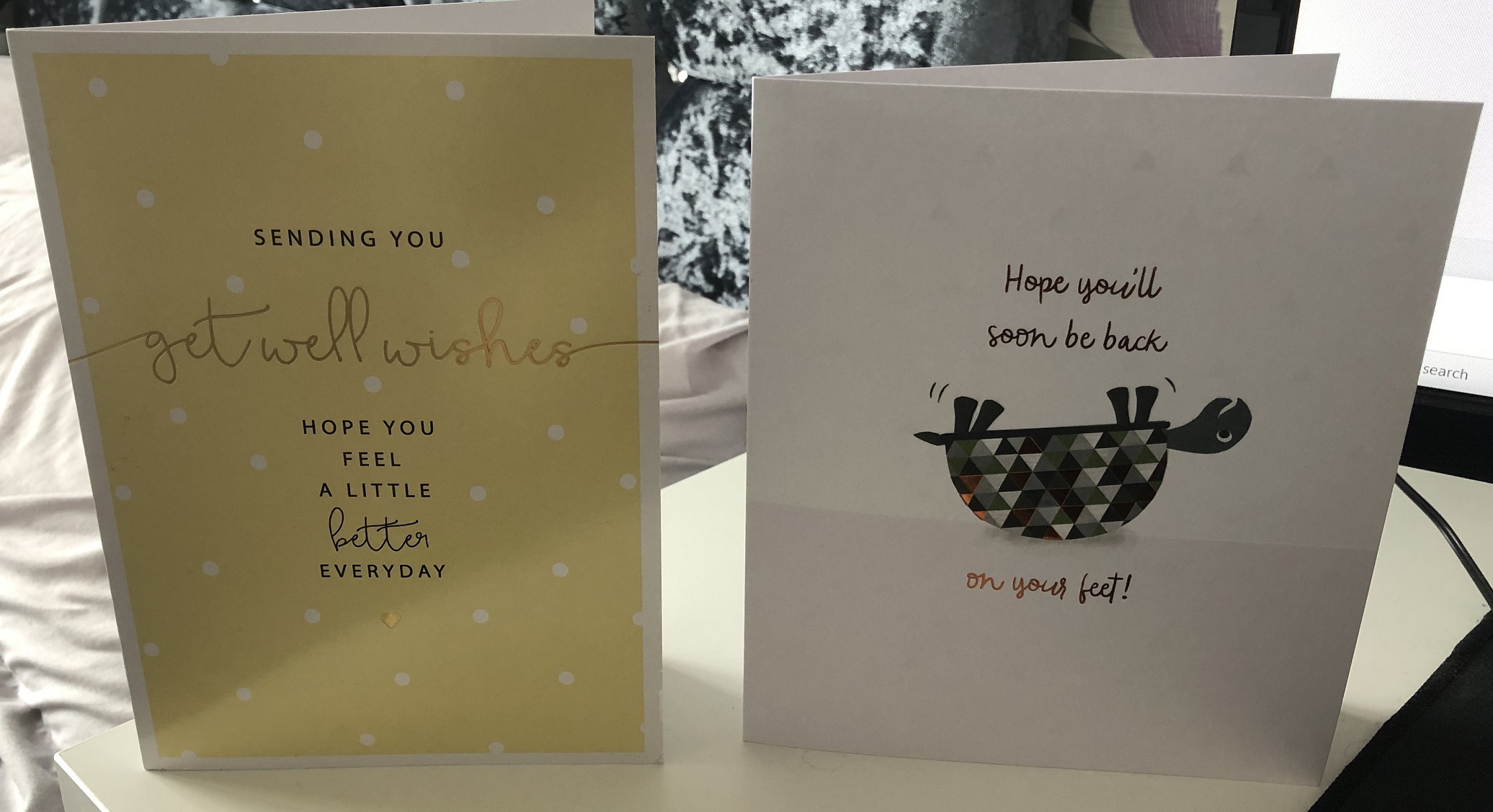 One part of my recovery that was proving to be an issue was urination. I undertook two Trial Without Catheters (TWOC) during the course of my stay in hospital. Despite the urge to go being very much there I was still withholding urine and were unsuccessful.

On the 18th March 2020, I was able to return home after two weeks of treatment. I still had the catheter but I was able to walk out without any help.

Two weeks later I had another TWOC which was successful. I was also taught how to self-catheterise daily using temporary catheters which gave me more freedom.

I was reminded in August that I was due an eye test as an annual check-up. On Wednesday 12th August I booked an appointment and went along to the opticians. I mentioned recently being diagnosed with MOGAD and that my eye sight may have been affected.

At the hospital they did not find any lesions in my optic nerves at hospital. But I thought getting the OCT was worthwhile.
The optician found something in the OCT scan which they wanted a second opinion on from my neurologist involving the optical disc. I decided to chase up the neurologist again to tell them to expect the results of scan from the opticians.

Later in the week I received a letter from the hospital for an appointment with the Eye Clinic. I presume this will be to further examine my eyes to see what has happened to my optical disc.

On the 11th September I visited the Uveitis/ Neuro Eye Clinic and went through another set of eye tests. This included a visual acuity test, visual field test and an OCT scan. The consultant explained that my optic nerve was not showing any signs of damage from a previous MOGAD attack.

On the 13th October I had another telephone conversation with the neurologist. He gave approval to drop the steroid dosage to 7.5mg from the 14th October. I need to drop to and then maintain at 5mg from the 14th November until the next appointment.

The neurologist also advised me to receive the flu vaccine as soon as possible. I went to receive my flu vaccine from my workplace on Friday 16th October.

After having the vaccine, I spent the rest of the afternoon on site at my workplace. Ever since my episode of Transverse Myelitis I have been working from home due to the pandemic.

On the 14th November I dropped to 5mg of Prednisone as per the guidance of my neurologist. Except some minor joint pain there weren't many side effects of dropping the dosage.

I was to maintain the steroid dosage at 5mg until the next appointment. On the Monday 7th December I met with my neurologist for the first time since being in hospital. He explained that we needed to do another blood test to check for MOGAD antibodies before progressing further.

My steroid taper down would continue to 2.5mg on the 14th December. Then I would stay at this level until we get the antibody test result back.

If the test shows a high/medium amount of anti-MOG antibodies, I will remain on 2.5mg of steroids and go onto a preventative treatment. However, if the test shows low antibodies or a negative result then I will continue tapering from steroids completely.
An MRI scan was also planned for March 2021 to have a 12 month comparison to my initial attack back in March 2020.

On the 17th March I received my results back from the MOG antibody test. The test result was positive, meaning that MOG antibodies are still in my blood. If I tapered from the steroids it could potentially cause another attack.

I went for an MRI scan on the 9th April for a comparison to my MOGAD attack 13 months since it happened. This MRI scan was done using contrast and

The results for the scan came back a few weeks later. It showed improvements from the ones taken in 2020 but did show some places were the spinal cord has not yet healed. Reassuringly there were no new lesions on the MRI scan which shows that the steroids are working in preventing an attack.

My neurologist now wants to try another preventative treatment called Azathioprine. This will hopefully allow me to taper completely from the steroids and prevent damage caused by long term steroid use.

On the 23rd July I got a call from my neurologist to discuss the next steps of treatment. To begin he told me to taper down from the 2.5mg of Prednisolone to 1mg each day for 4 weeks. Once that was completed, we would begin a preventative treatment and taper from the steroids completely.

I would then begin taking 25mg of Azathioprine twice a day for two weeks before increasing the dose to 50mg per day. After another two weeks I would increase the dose by 25mg again to 75mg twice a day which is where I would keep it providing serious side effects or relapses.

The plan is to then stay on the 75mg dosage for 1 to 2 years to prevent relapses. I was told the 2 years after the first MOG Antibody Disease attack is regarded as the period of time which a patient is most likely to suffer a relapse. The aim of the Azathioprine is to get me through this period whilst avoiding any long term effects of using steroids instead.

Ever since Azathioprine was mentioned to me by the neurologist I began researching into the treatment. The only issue I had with it was that there was a cancer risk associated with the treatment. Because of this I was concerned about taking Azathioprine for the long term.

Thankfully the plan is to just be on the treatment for a few years before tapering from all treatments entirely, providing everything goes well with no side effects or relapses. Hopefully all goes well with this new treatment and I will no longer have to worry about the effects of long term steroid use either.

I tapered down to 1mg of Prednisolone steroids on the 31st July and then after no issues I started Azathoprine on the 16th August with a dose of 25mg two times a day. So far there has been minimal side effects with either of the treatments and I tapered completely from steroids on the 6th September 2021.

Since then, I have now increased the Azathioprine dose to 50mg twice a day as of the 13th September. This is the level I will be staying at for the foreseeable future. Hopefully if I stay relapse free for the next 2 year or so I may be able to come off treatment entirely. I have also now fully tapered from steroids and will be only using Azathioprine as a treatment going forward.

COVID and another MOG Antibody Test

In November 2021 I caught the coronavirus, which was a concern since Azathioprine is an immunosupressant drug which effects the immune system. Despite this, I only had one or two days where I actually felt ill. This consisted of having flu like symptoms and a few of my MOGAD symptoms were also aggravated such as the pressure points in my body turning to aches and having brain fog.

Thankfully this did not last for too long and whilst I also lost my sense of taste and sense of smell, this returned back to normal after around a month or so. Overall, it was reassuring that when I caught it that there was not a big reaction and it didn’t make me really ill.

In December 2021 I also had another face to face appointment with my neurologist. There I had blood drawn for another MOGAD antibody test and was booked for another MRI scan. Current waiting times for an MRI scan in the NHS are rather long due to the impact of the pandemic so I was told that this may happen in April but so far I have not heard anything.

The result of my MOG antibody test came back on the 25th January as a 'low positive'. I now have another appointment with my neurologist on the 6th May to discuss the results and what the next stage of my treatments will be.

Sign up to receive product updates and special offers from our team.